The case of the controversial project of the company “105 SA”, interests Ag. Michalopoulou, arrives at the Naxos Prosecutor’s Office for the investigation of any criminal acts, while the Deed of Confirmation of the violations prepared by the inspectors was sent to the Inspector General of Public Administration in order to be informed about the activities of public services.

Specifically, the inspectors ask the question whether the revisions of the building permit by the Building Service of the Municipality of Thira were issued illegally. The next development of the confirmation of the violations is expected to be the imposition of fines on the company.

It is recalled that the project included large-scale structural interventions in one of the most intact landscapes of the Aegean; an island-cape, a monument of natural beauty, and a beach that had not previously experienced man-made interventions .

The complex tourist accommodation was expected to have a capacity of 250 beds in its final form, including a hotel, spa center and support projects, such as a boat service platform for transporting customers, artificial beaches, swimming pools, etc. From the beginning, environmental organizations and agencies warned that the above interventions would cause irreparable damage to the natural environment of the area. 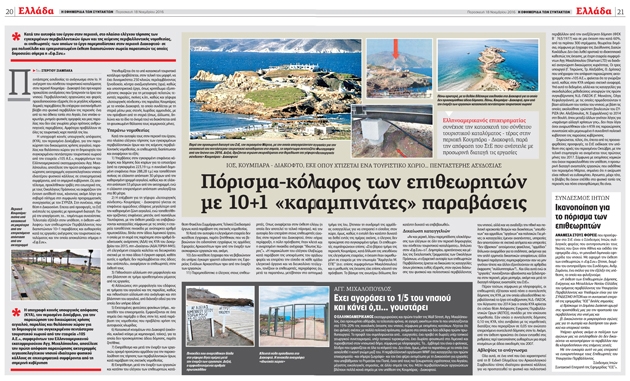 The article of “Ef.Syn.” 11/18/2016, which had highlighted the issueAccording to the inspectors’ document, the violations, which include acts of environmental degradation and were confirmed against the company of the Greek-American millionaire and former Wall Street trader, briefly and among others, concern:

Arbitrary interventions on the coast from the construction of the bridges connecting the small island of Diakofto with Koumbara beach. The technical characteristics of the bridges were different from those envisaged by the Environmental Impact Study: instead of wooden piles, horizontal concrete surfaces were placed.
Excavation – clearing, alteration of morphology and destruction of vegetation in a part of a demarcated stream.
Opening of a road without a permit within the seafront and beach area of ​​Diakofto.
Planting trees of a foreign species: palm trees in particular, which are also … a trademark of the businessman. They appear in all the points he has intervened in Ios.
Obstruction of the control of the Environmental inspectors in Diakofto. There was a fence and a sign that read “Private space”. Consequently, the audit of the inspectors in March 2016 (see “Ef.Syn.” 18/11/2016, “Conclusion of the inspectors with 10 + 1” carbine “violations”) was not carried out throughout the project and so the (many, if nothing else) infringements were found in only one part of it. The allegations and apologies of the company for the above violations – in all cases submitted – were not accepted by the inspectors.

A serious issue also arises with the revisions of the building permit in 2014 and 2015. They were issued, always according to the document of the inspectors, by the Building Service of the Municipality of Thira, while -if it is a Complex Tourist Accommodation- they had to be issued by the competent service of EOT.

The construction of the tourist village of “105 AE” in the area of ​​Koumbara – Diakofto of Ios has long ago provoked reactions that go beyond the borders of the island. The signing of the joint ministerial decision (JMD) in December 2015 for the concession of the right to use the seashore, beach and sea space to the company is the first decision to concede an Aegean coastline of special natural beauty to business interests by the current government.

Intergovernmental frictions were automatically caused, with the Green Ecologists expressing their strong opposition, talking about a serious blow to the program cooperation agreement with SYRIZA. In addition, there were appeals to the Council of State, with the Supreme Administrative Court taking a position on the project.

“Following the decision on the total suspension of work in the area by the CoE, in March 2016” points out the architect George Dimitriou, a regular member of the Executive Secretariat of the Green Ecologists and one of the people who politically initiated the case, “the confirmation of almost all of 10 + 1 “carbine” violations, recorded by the Environmental Inspectors, comes to strengthen the belief in the tragic inadequacy of government and state officials who, in one way or another, got involved in the case and who through their stance or signature they prove to be completely unsuitable to defend what is assigned to them through their election or even their appointment: the satisfaction of modern needs without diminishing the possibilities of future generations to meet their own needs “.